My summer class is already half over and we've just begun to think about teaching multiplication and division. Here's the introductory activity I gave them to think about repeated addition, making arrays, and writing number sentences. 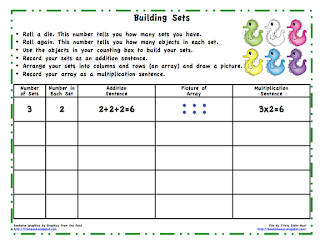 This activity meets the following Common Core Standards for Mathematics.
Download Building Sets.
Posted by Tricia at 10:16 AM