Water is a miraculous substance. It is the only compound that commonly exists in all three phases (solid, liquid, gas) on Earth. The unique properties of water are a major factor in the ability of our planet to sustain life.


Here's an annotated list of books on our most precious natural resource. 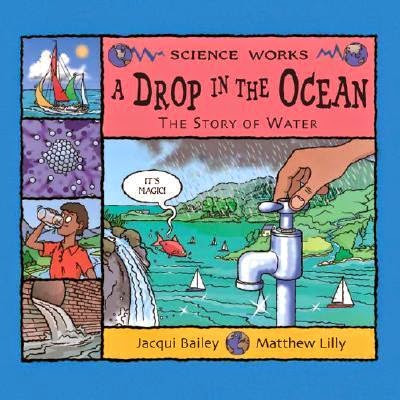 A Cool Drink of Water (2002), written by Barbara Kerley - This gorgeous book from National Geographic highlights the importance of water in our daily lives while showing how people around the world use and conserve water.

Did A Dinosaur Drink This Water? (2006), written and illustrated by Robert E. Wells - Wells tackles the water cycle and the idea that the Earth's water has been recycled since before the time of the dinosaurs. Readers see water move through all three states as it moves through streams, rivers, oceans, clouds, rain, and more. The text is written in a kid-friendly, understandable manner and asks and answers good questions. For ideas related to using this book in the classroom, check out the Robert E. Wells Science Series Teachers' Guide.

A Drop Around the World (1998), written by Barbara McKinney and illustrated by Michael S. Maydak - Follow one drop of water as it makes its way on an amazing journey around the world emphasizing how essential water is every environment and how it is necessary for life. Traveling with Drop, readers see water underground, in plants and animals, clouds, ice and snow, and more. Told in verse, readers get a hefty dose of science and view water in all three forms as a solid, liquid, and gas. With four pages of back matter on the science of water, this book provides a good introduction to water and the water cycle.

A Drop in the Ocean: The Story of Water (2004), written by Jacqui Bailey and illustrated by Matthew Lilly - This title in the Science Works series follows a water droplet from the time when it evaporates from the ocean and becomes the water vapor that makes up clouds, to the moment it falls as rain. Readers learn how water is cleaned and used before being returned again to the water cycle. Back matter includes an experiment, facts about water, and useful websites.


A Drop of Water (2006, OP), written and illustrated by Gordon Morrison - This book begins with a child exploring the water in a creek and imagining how a drop on his finger made its journey through the water cycle. Water connects everything in the story. Without it there are no clouds, no stream, no pond, no rain, no meadow, and none of the living things that rely on water for life. An illustrated appendix in the back describes the plants and animals encountered in the text.

A Drop of Water: A Book of Science and Wonder (1997), written and photographed by Walter Wick - This book is a stunning exploration of water in its many forms. Inspired by science books written for children more than 100 years ago, Wick was inspired to try the experiments listed and photograph them. The photographs show readers water in a way most have certainly not seen before. Wick carries out a number of these "old" experiments and in doing so captures water in stop-motion and highly magnified. The text that accompanies these photos is clearly written and not only informs but encourages exploration. Photos and text explore water's elastic surface, floating and sinking, soap bubbles and bubble shapes, moving molecules, ice, water vapor, condensation, evaporation, how clouds form, snowflakes, and much more. There is so much to learn here! Back matter includes ideas for readers to carry out their own observations and experiments.

Follow the Water from Brook to Ocean (2000), written and illustrated by Arthur Dorros - This title in the Let's-Read-and-Find-Out Science series clearly illustrates where water comes from, how it travels, and where it goes. Readers will learn that water is always on the move, shaping our earth. They will also learn why it is important to keep water clean. (Check out this lesson from the Georgia Aquarium which contains good guiding questions to ask at specific points while reading the book.)

I Get Wet (2002), written by Vicki Cobb and illustrated by Julia Gorton - This title in the Science Play series looks at water. Using simple text and hands-on activities, Cobb encourages kids to explore and experiment to learn about the most basic properties of water. The boy in the book learns by pouring water into different containers, observing it drip and flow, and trying to absorb it with waxed paper and paper toweling. The interactive format of questions and answers guides readers through these activities using everyday objects.


One Well: The Story of Water on Earth (2007), written by Rochelle Strauss and illustrated by Rosemary Woods - In this book, Strauss tells the story of our planet's most precious resource and provides an instructive and often-times inspiring look at water. She reminds us that the amount of water on Earth hasn't ever changed. Since this water has been around for billions of year, it is entirely possible that the water you drink may have "quenched the thirst of a dinosaur" more than one hundred million years ago. The double page spreads provide both informational paragraphs and short, factual boxed insets, beginning with the distribution of water on earth, the water cycle, water's essential role in life on Earth and watery habitats. From here, the author looks at how people use, need and access water. The book concludes by looking at demands on the well, pollution, and saving our water. 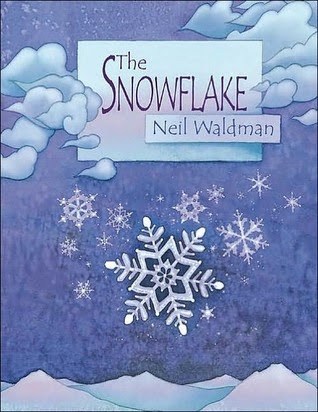 The Snowflake: A Water Cycle Story (2003), written and illustrated by Neil Waldman - In this book about the water cycle, water takes many different forms, but it's the form of snow in which this journey begins. In January a snowflake lands on the peak of a mountain. Over the course of year the snowflake changes both location and form. In February it's blown into a mountain pond, where it melts in March. This tiny droplet sinks into an underground stream where it continues its journey. That water drop travels to a farm and evaporates into the clouds before it comes back down to the ground to travel even further. Eventually it becomes a snowflake once more. This book emphasizes the idea that resources on Earth are finite. Kids have a hard time with this notion, but Waldman makes this message clear as readers learn that the water we drink, wash in, and play in is part of an amazing cycle that repeats itself over and over and over again.


This Is The Rain (2001), written by Lola Schaefer and illustrated by Jane Wattenberg - This picture book about the cycling and recycling of water uses the familiar cumulative pattern of "The House That Jack Built." Bold, vibrant photo-collages accompany the text. It begins this way. "This is the ocean,/ blue and vast,/ that holds the rainwater from the past." Can you guess where this goes? Next comes the sun to warm the oceans, which eventually forms vapor that fills the clouds, which produce the rain that falls. Here's the text from the page on rain. "This is the rain,/ falling all day,/ that forms in clouds,/ low and gray,/ full of vapor, moist and light/ made when sunshine,/ hot and bright,/ warms the ocean, blue and vast,/ that holds the rainwater from the past." After passing through all stages of the water cycle, Schaefer circles back to the rain falling "somewhere every day." The book ends with a short note about the water cycle on planet earth.


Water (2002), written by Emily Neye and illustrated by Cindy Revell - In this Penguin Young Reader, Neye introduces beginning readers to water in its many forms. The text combines simple words, repetition, and visual clues to help readers learn about the properties of water.
Water, Water Everywhere (1995), written by Cynthia Overbeck Bix and Mark Rauzon - This Reading Rainbow selection celebrates the many forms and properties of water. Easy to understand text is complemented by gorgeous color photographs. Readers learn about the water cycle, how moving water changes the earth’s surface, the importance of water to life on our planet, and why conserving water and keeping it free from pollution is so important.

The Magic School Bus at the Waterworks (1988), written by Joanna Cole and illustrated by Bruce Degen - This very first book in the series takes Ms. Frizzle's students on a field trip to the waterworks. On their trip they learn that water is a substance that can naturally be found as a solid, liquid or gas. They also come to know the water cycle (personally!) and how water evaporates into a gas to form clouds, and how it later liquefies and falls to the ground as rain. 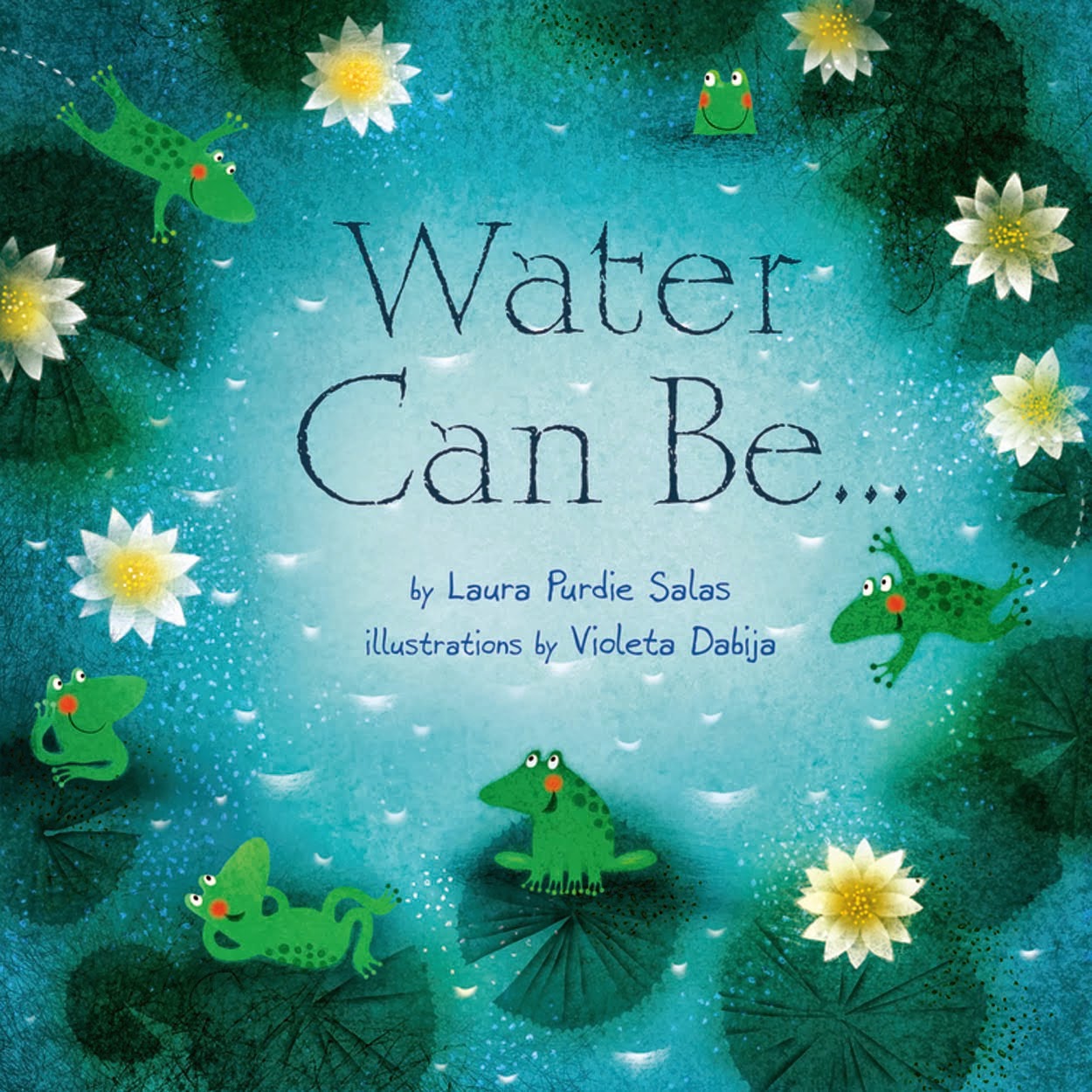 All the Water in the World (2011), written by George Ella Lyon and illustrated by Katherine Tillotson - Where does water come from and where does it go? In this book length poem using occasional rhyme, readers learn who uses water, what it's used for, and why all living things depend upon water. The language is this one is exquisite with lines like this: "Thirsty air / licks it from lakes / sips it from ponds / guzzles it from oceans . . ." A terrific title about all the water in our world.

How to Cross a Pond: Poems About Water (2003, OP), written by Marilyn Singer and illustrated by Meilo So - This collection of poems is one of three in a series of nature books. The trim size is small, but don't let that fool you. These little gems are filled with Meilo So's gorgeous India ink drawings on rice paper (all shades of blue in this work) and Singer's fabulous poems that in turn will make you laugh then nod and smile in agreement. Composed of 19 poems, Singer deftly captures water in a range of forms and places.


Splish Splash (2001), written by Joan Bransfield Graham and illustrated by Steve Scott - This collection of 21 concrete poems shows and describes water in a myriad of forms, including crocodile tears, ice cube, popsicle, snow, hail, dew and more. You can preview a number of the poems at Google Books.


Water Can Be... (2014), written by Laura Purdie Salas and illustrated by Violeta - This is a book length poem that begins with spring and cycles through the four seasons looking at the importance of water. The text is economical, but it doesn't miss a beat in highlighting the important functions and characteristics of water. For example, otter feeder relates to the fact the water in rivers sustains many of the life forms that otters eat. Back matter in the book does a terrific job of explaining the meaning of each water "nickname."


Water Music (2003), written by Jane Yolen with photographs by Jason Stemple - Inspired by gorgeous photos, this collection of 17 poems in a variety of  forms lyrically examines water in a range of forms, including soap bubbles, icicles, rivers, waterfalls, rain showers, and more.

For additional resources on water, consider these sites.

I also have a Pinterest board on this topic with many ideas and activities for instruction.


You'll notice that books on rain, snow, and clouds are sorely lacking in this list. That is the subject for the my next thematic list, so stay tuned!

P.S. - Put the following book on your TBR pile. It comes out in May and looks fabulous. 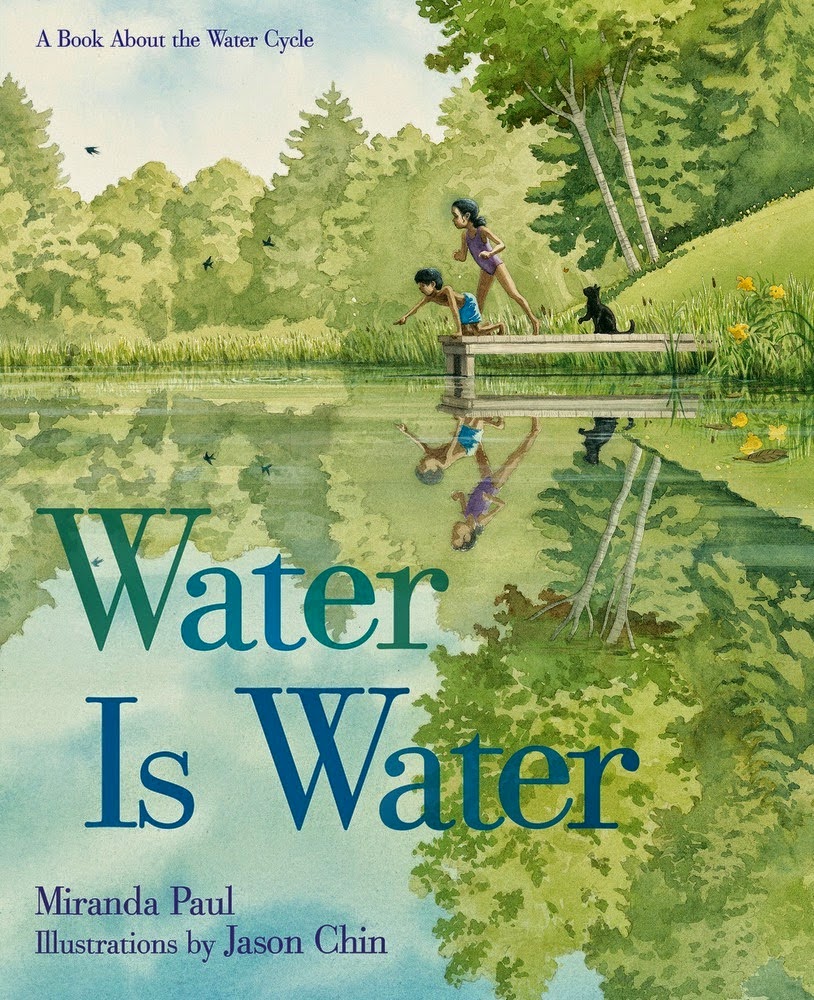 Water is Water, written by Miranda Paul and illustrated by Jason Chin.
Posted by Tricia at 12:01 AM