There are many types of storms, including thunderstorms, tornadoes, hurricanes, and blizzards. Caused by extremes in weather, storms can cause severe damage. But extremes are not limited to storms. Weather conditions such as too little or too much precipitation can result in drought or flood. Extremely high temperatures can cause a heat wave. Whatever the condition, extreme weather is something meteorologists work hard to predict so that lives and property can be protected.


Here is a list of books that focuses on storms and events caused by extreme weather conditions. 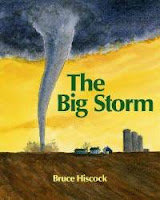 The Big Rivers: The Missouri, the Mississippi, and the Ohio (1997, OP), written and illustrated by Bruce Hiscock - In a text that combines history, geography and science, Hiscock describes the flooding of the upper Mississippi in 1993, while explaining what a river basin is, how it works as part of the water cycle, and how the system of dams and levees failed on this occasion.

The Big Storm (2008), written and illustrated by Bruce Hiscock - This book follows the course of one large weather system as it travels across the United States.  Hiscock carefully chronicles a large springtime storm in 1982 as it moves from rain in the Pacific Northwest, to a blizzard in the Sierras, to tornadoes and hail in the Texas plains, and finally to New York City where it becomes a blizzard. As the storm rolls on, readers learn about weather forecasting, how storms are formed, and how they travel.

Blizzard!: The Storm That Changed America (2006), written by Jim Murphy - The great blizzard of 1888 changed the way we respond to storms. Using personal recollections as well as newspapers, photographs, and sketches made by news artists during the storm, Murphy takes readers into the unfolding blizzard and its aftermath. As a result of this storm, legislation was passed in New York to clean up the city, bury wires, build the subway, and more. Back matter includes a six page narrative discussion of notes on sources and related reading material.

The Great American Dust Bowl (2013), written and illustrated by Don Brown - This graphic novel is a masterpiece of history and science, weaving together sourced facts in an accurate historical narrative. Brown uses words from primary source materials to explain how the heartland of America became a vast barren plain, citing drought, the Depression, the loss of bison, and more. Includes scientific explanations for the dust storms as well as first hand accounts. Back matter includes a selected bibliography and source notes.

National Geographic Readers: Storms (2009), written by Miriam Goin - This Level 1 reader introduces the basics of weather and then goes on to describe a variety of storms, including thunder and lightning, hailstorm, sandstorm, blizzard, monsoon, and others. Back matter includes a glossary.

Rising Waters: A Book About Floods (2005), written by Rick Thomas and illustrated by Denise Shea  - This book in the Amazing Science series describes the causes and effects of flooding. Back matter includes a glossary and helpful print and web resources.

Sizzle!: A Book About Heat Waves (2005), written by Rick Thomas and illustrated by Denise Shea - This book in the Amazing Science series describes what a heat wave is and how it affects living things in rural and urban areas. Back matter includes a glossary and helpful print and web resources.

Storms (1992), written by Seymour Simon - In stunning pictures and clear and engaging text, Simon provides clear explanations of various storm types, how they form, and how destructive they can be.

Whiteout!: A Book About Blizzards (2005), written by Rick Thomas and illustrated by Denise Shea - What happens when snow is falling and wind is blowing? Readers will learn the answer to this question and more as they read about the conditions often found during a blizzard, include including whiteouts, strong winds, snowdrifts, and wind chills. 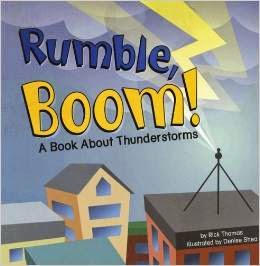 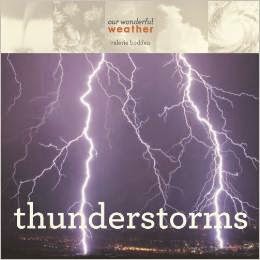 Flash, Crash, Rumble, and Roll (1999), written by Franklyn Branley and illustrated by True Kelley - This book in the Let's-Read-and-Find-Out Science series focuses on thunder and lightning. Back matter includes 2 simple experiments and additional resource suggestions for learning more.


Lightning! (2006), written by Seymour Simon - With stunning pictures and clear engaging text, Simon describes how and why lightning occurs, different types of lightning, how scientists study it, how to stay safe during an electrical storm, and more.


Lightning, Hurricanes,  and Blizzards: The Science of Storms (2010), written by Paul Fleisher - At nearly 50 pages, this book is filled with information about storms. It opens by explaining that "Storms are the most dramatic weather events." Five chapters include: (1) air masses, weather fronts, and mid-altitude cyclones; (2) thunderstorms; (3) tornadoes; (4) hurricanes; and (5) other storms. Back matter includes a glossary, selected bibliography, further reading, and web sites.

Nature's Fireworks: A Book About Lightning (2003), written by Josepha Sherman and illustrated by Omarr Wesley - This book in the Amazing Science series describes the different ways lightning is created  and what makes it flash across the sky. Back matter includes a glossary and helpful print and web resources.

Our Wonderful Weather: Thunderstorms (2014), written by Valerie Bodden - Using beautiful photos and clear, concise text, Bodden describes what thunderstorms are, the relationship of thunder and lightning, kinds of thunderstorms, and more. Back matter includes a glossary, titles for learning more, and helpful web sites.

Rumble, Boom!: A Book About Thunderstorms (2005), written by Rick Thomas and illustrated by Denise Shea - This book in the Amazing Science series describes how thunderstorms form. Also included is information on phenomena such as thunder, lightning, storm cells, downdrafts, super cells, and more. Back matter includes a glossary and helpful print and web resources.

Before moving on to books about tornadoes and hurricanes, let's take a quick break to watch this terrific little Peep and the Big Wide World video on stormy weather.
Do Tornadoes Really Twist? (2000), written by Melvin and Gilda Berger and illustrated by Higgins Bond - In an engaging question and answer format, this book provides a good introduction to tornadoes and hurricanes. Illustrations, diagrams and maps accompany clearly written and engaging text.

Our Wonderful Weather: Tornadoes (2014), written by Valerie Bodden - Using beautiful photos and clear, concise text, Bodden describes what tornadoes are, their shapes and sizes, how they are measured, and more. Back matter includes a glossary, titles for learning more, and helpful web sites.


Tornado! The Story Behind these Twisting, Turning, Spinning, and Spiraling Storms (2011), written by Judy and Dennis Fradin - This National Geographic Kids book includes amazing photographs and a wealth of information on how tornadoes form and are categorized, their destructive power, information on storms of note, and more. 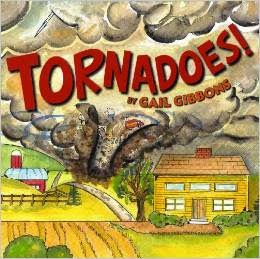 Tornado Alert (1990), written by Franklyn Branley and illustrated by Giulio Maestro - This book in the Let's-Read-and-Find-Out Science series describes how, where, and when tornadoes happen and what to do during a tornado.


Tornadoes (2001), written by Seymour Simon - In stunning pictures and clear and engaging text, Simon provides a comprehensive look at tornadoes, including how they form, where they occur, and how they are studied.


Tornadoes! (2012), written by Marcie Aboff and illustrated by Aleksandar Sotirovski - This graphic novel uses text and illustrations to explain how tornadoes form, how they are measured, and how to stay safe during one.

Tornadoes! (2010), written and illustrated by Gail Gibbons - In this book, Gibbons uses text and images to help readers understand how tornadoes form, how they are classified, where they typically appear, safety procedures during a storm, and much more.


Twisters: A Book About Tornadoes (2005), written by Rick Thomas and illustrated by Denise Shea - This book in the Amazing Science series describes how tornadoes form and provides explanations updrafts, downdrafts, thunderstorms, rotation, and funnel clouds. Back matter includes a glossary and helpful print and web resources. 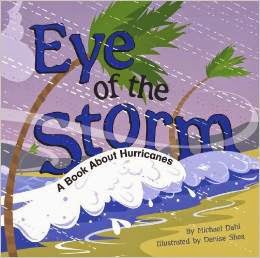 Eye of the Storm: A Book About Hurricanes (2005), written by Rick Thomas and illustrated by Denise Shea - This book in the Amazing Science series describes how hurricanes form, what tropical storms are, and how storm surges occur. Back matter includes a glossary and helpful print and web resources.


Hurricane! (2008), written and illustrated by Celia Godkin - In a beautifully illustrated book, readers learn how coastal Florida has adapted to seasonal storms. With an eye to the flora and fauna, Godkin shows and tells readers how the opossum, fiddler crab, manatee, and many others (including humans), weather the storm.


Hurricanes (2007), written by Seymour Simon - With incredible photographs clear and concise text, Simon provides readers with an in-depth look at one of nature's most terrifying storm types: the hurricane. Included is information on how hurricanes develop, how they are studied, and safety measures for those faced with such a storm.


Hurricanes! (2012), written by Marcie Aboff and illustrated by Aleksandar Sotirovski - This graphic novel uses text and illustrations to explain how hurricanes form, how they are named and measured, and how to stay safe during one.

Hurricanes! (2010), written and illustrated by Gail Gibbons - In this book, Gibbons presents information about hurricanes in a kid-friendly manner using a combination of engaging water-color illustrations and simple text. Included are facts about the different types of hurricanes, where they occur, how meteorologists predict them, and more.


Our Wonderful Weather: Hurricanes (2014), written by Valerie Bodden - Using beautiful photos and clear, concise text, Bodden describes what tornadoes are, how they are measured, they eye of the storm, and more. Back matter includes a glossary, titles for learning more, and helpful web sites.

The Whirlwind World of Hurricanes with Max Axiom, Super Scientist (2010), written by Katherine Krohn and illustrated by Cynthia Martin and Al Milgrom - This graphic novel follows scientist Max Axiom as he explores the science and history behind hurricanes. 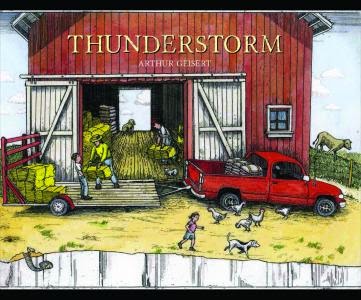 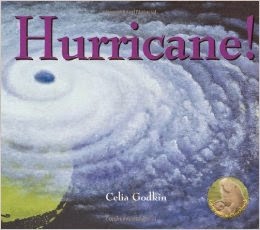 Flood (2013), written and illustrated by Alvaro Villa - This wordless picture book tells the story of the natural destruction that flooding can cause. Readers follow a family as they prepare for a storm, head to higher ground, and return to see the devastation brought by flood waters. Despite their despair at seeing their damaged home, the family rebuilds.

The Magic School Bus Inside a Hurricane (1996), written by Joanna Cole and illustrated by Bruce Degen - Miss Frizzle leads her class on a field to visit a weather station, but of course, a great deal happens before they actually get there. The bus turns into a hot air balloon and rises into the sky. Once Ms. Frizzle hears a hurricane watch is in effect, they head south to the equator where the students watch the birth of a hurricane. Included is a great deal of information on how hurricanes form, their effects, and other tidbits on a range of weather-related topics.

Thunderstorm (2013), written and illustrated by Arthur Geisert - The illustrations for this wordless picture book were created in one 415 inch long panorama that beautifully details the effects of a passing storm and shows how a farm family and various animals weather the storm. The passing storm inflicts real damage, but Geisert wraps things ups by showing the community getting down to the work of repair once the skies clear.

That's it for now. This makes 4 separate lists all related to the water cycle and weather. Join me in two weeks for my next thematic list!
Posted by Tricia at 10:02 AM