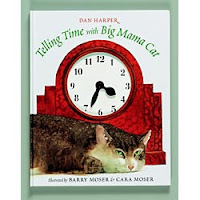 
This book is about a cat who knows how to tell time.  Mama Cat explains that her busy day consists of eating and napping.  Mama Cat also notices human schedules, which include morning routines and evening routines.  Clocks that show the time that various activities are done are shown throughout the book.

This book is about a ladybug who is looking for a fight.  The ladybug challenges everything that she encounters.  The time is given during each of the ladybug's encounters with other insects.  In addition, the sun is also in a different position in each picture, so that children can learn the sun's position during each time of day shown.

This book gives a simple introduction to telling time.  It begins as a typical nursery rhyme.  A grandfather clock is depicted throughout much of the book and the hours continue to strike as the little mouse scurries about.

This book is similar to a textbook, but it is directed toward a younger audience.  It discusses the definition of time, and the illustrations encourage children to want to continue learning about time. 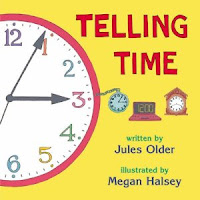 Learn to Tell Time
The object of this game is to help Marvin travel through time to find his astronaut friend.  Children practice telling time by choosing a type of clock.  Depending on the clock that the child chose, they are supposed to drag the hands of the analogue clock or click the up and down buttons on the digital clock.

Bedtime Bandits
This is a great game for children to play right before bedtime!  Children even get to type their name and choose their gender.  First, children need to find the time located in the bottom left corner of the screen.  Then, children need to find the corresponding analogue clock and move the character under the correct clock by using the right and left arrow keys on the computer keyboard.  When the character is underneath the correct clock, press the space bar key to turn on the flashlight and blast the clock.  When a clock his the ground, it's time to go to bed!

Time Travlin'
This game, which can be found toward the bottom of the homepage, is a scavenger hunt through space and time.  An analogue clock is presented with a specific time that has to be converted to digital.  The object of the game is to keep the ship's clock on the correct time.  The ship can travel through three ages, but each age gets more challenging than the one before.

Posted by Mandy Fletcher at 9:47 PM