A food chain shows the ways in which the organisms in an ecosystem interact with one another according to what they eat. When a series of food chains weave together in an ecosystem they are collectively known as a food web. While there are many good nonfiction books about food chains (just ask your school  librarian for some suggestions), I am partial to picture books and poetry on the subject. Here are some books and web resources that can support instruction in this area. 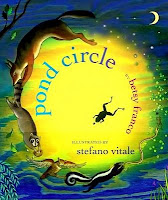 While mainly about a shoreline food web on the Delaware Bay, this book also does a fine job describing the life cycle of the horseshoe crab.  Horseshoe crab eggs serve as an important component of a web in which migrating shorebirds, fish, and other animals feed on the eggs. While these animals feed on the eggs, they are in turn eaten by predatory birds (herons and a falcon).

Pond Circle. By Besty Franco. Illus. by Stefano Vitale. 2009. 32p. Margaret K. McElderry, (9781416940210). Gr. 1-3.
Using a form that follows "The House that Jack Built," this rhyming text explores a food chain around the pond near a young girl's house. Here is an excerpt. "This is the frog / the loud bullfrog / that gobbled the beetle / that ate the nymph / that nibbled the algae / that grew in the water / that filled the pond / by Anna's house." 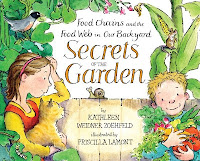 Secrets of the Garden: Food Chains and the Food Web in Our Backyard. By Kathleen Weidner Zoehfeld. Illus. by Priscilla Lamont. 2012. Knopf Books for Young Readers, 40p. (9780517709900). Gr. 2-5.
This book opens in the spring with a family of four (mom, dad, son, daughter) preparing to plant a garden. The soil is prepared, seeds are planted, and then watered. Narrated by Alice, the young girl in the story, readers are lead through the many stages of growth of in the garden. The two chickens, Maisy and Daisy, appear throughout the book and provide information on everything from composting, to the plant parts we eat, to food chains and food webs, and more.

Trout Are Made of Trees. By April Pulley Sayre. Illus. by Kate Endle. 2008. 32p. Charlesbridge Publishing, (9781580891370). Gr. 1-4.
What happens when leaves fall from a tree and land in a stream? "They ride in a rush above rocks and over rapids. They snag and settle soggily down." From here they become food for bacteria and a home for algae. They are further broken down by little critters, like crane flies, caddisflies, shrimp and stoneflies. These critters are eaten by predators. Guess where those leaves are now? When the predators are eaten by trout, the trout are made of trees. 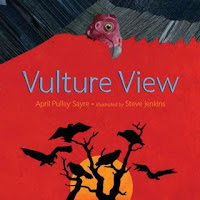 Vulture View. By April Pulley Sayre. Illus. by Steve Jenkins. 2007. 32p. Henry Holt and Co., (9780805075571). Gr. K-3.
Scavengers and decomposers play a very important role in maintaining the balance of the ecosystem. In helping to break down dead organisms, they are responsible for returning basic nutrients to the soil so that they may reenter the chain. In this book, we get a glimpse of the scavenging role that vultures play, along with some poetry and interesting facts about these oft maligned birds.

This collection of 29 poems examines what animals eat and are eaten by.  Not for the faint of heart, or squeamish, the poems provide a realistic, albeit humorous look at  the natural order of things. Included in the back matter is an explanation of some of the more difficult concepts and vocabulary (symbiosis, mutualism, commensalism, etc.). Readers will also find includes information on the subjects of the poems.

Wolf Island. By Celia Godkin. Illus. by the author.  2006. 32p. Fitzhenry and Whiteside, (9781554550081). Gr. 3-6.
What happens when a top predator in well-balanced ecosystem disappears? This story highlights the changes that occur on an island after a family of wolves accidentally leave the island for the mainland. Without predators, there is nothing to keep the deer population in check. When it swells, the deer eat so much grass that rabbits and mice have fewer young. This results in less food for foxes and owls. This is a terrific resource for demonstrating how the balance of an ecosystem can easily be upset. It also does a fine job of explaining why the top predators in a food chain are so important.

Energy Pyramid
This page includes a video that describes the energy pyramid in an ecosystem. It defines producers, herbivores, and carnivores. Once students review this information, they can learn more about energy pyramids of the forest, prairie, and ocean.


Scholastic StudyJams - Food Chains
Here's a video from Scholastic on food chains. Also includes links to key vocabulary and a "Test Yourself" feature.

Wild Kratts: Up the Ocean Food Chain!
This short, entertaining video from PBS describes the organisms in a simple ocean food chain.

Web Sites
BBC Bitesize Science - Food Chains Activity
In this activity, kids try to discover the organism at the top of the food chain in a land and sea ecosystem. As the parts of the chain are filled in, information about the animals appears on the screen.

BrainPOP Jr. - Food Chain Lesson Ideas
This page includes background information on food chains and food webs, as well as ideas for teacher activities and family activities. Links to BrainPOP videos are included, but keep in mind that even though one video a day is free, these are generally available only to subscribers.

Chain Reaction - Build a Food Chain
After reading a bit about the organisms that make up the food chain, kids get to try building a chain that might be found in a forest or a northern ecosystem (think Arctic).

The Food Chain Game
Kids drag parts of the food chain into the correct position. Once the chain is complete (and correct), kids can watch it come to life and see the chain in action.

Food Chains
In this activity kids learn about various living things, sort them into different categories and discover where they fit into the food chain. Habitats explored include ocean, forest and desert.

My Science Box - Food Chains
In this food chain lesson, students review the concepts of food chains and the roles of organisms in a food chain through a sorting activity. Cards representing different organisms in a California ecosystem are first sorted by what they eat (herbivore, carnivore, etc.) and then are reordered to create several food chains.

Science NetLinks: Cycle of Life - Food Chain
This lesson focuses on the food chain by helping students understand that almost all kinds of animals’ food can be traced back to plants and that the sun is the ultimate source of energy needed for all organisms to stay alive and grow.