Here's a fabulous video on the ecological impact of returning wolves to Yellowstone after an absence of nearly 70 years.


If you want to read more about the reintroduction of wolves to Yellowstone, check out one of these titles. 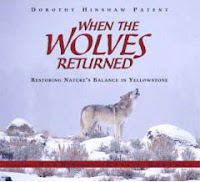 When the Wolves Returned: Restoring Nature's Balance in Yellowstone, written by Dorothy Hinshaw Patent with photographs by Dan and Cassie Hartman, provides a historical account of the changes to the Yellowstone ecosystem by both the loss and reintroduction of the wolves. The gorgeous photographs of the Hartmans are accompanied by black and white images from the National Park Service. The text is written on two levels, with short, simple sentences on the left page, with paragraphs of more detailed information on the right page. At the end of the text, an illustrated page entitled "The Wolf Effect" looks at the connections among plants and animals in the Yellowstone ecosystem. Also included are an index , list of resources for kids, and a photo quiz.

The Wolves are Back, written by Jean Craighead George and illustrated by Wendell Minor, shows the restoration of the Yellowstone ecosystem through the eyes of a wolf pup. It begins with the pup looking over the landscape, then taking in a meal in which other animals also share the food. The next page reads:


Where had they been?

Many years ago the directors of the national parks decided that only the gentle animals should grace the beautiful wilderness. Rangers, hunters, and ranchers were told to shoot every wolf they saw. They did. By 1926, there were no more wolves in the forty-eight states. No voices howled. The thrilling chorus of the wilderness was silenced.

The wolves were gone.

What follows is a look at how the reintroduction of the wolves brought positive changes back to the ecosystem. Near the end, the wolf pup grows up and heads south where he meets a mate from another pack. Minor's illustrations are exquisite and show the beauty of the landscape and its inhabitants.
Posted by Tricia at 1:53 PM No comments:

Pi Day is Tomorrow ... But Should We Celebrate It?

All you math lovers out there should know that tomorrow is Pi Day. But should we celebrate pi or tau? Don't know what I'm talking about? Take a look at these two videos.


Learn more about Tau by reading The Tau Manifesto by Michael Hartl.
Posted by Tricia at 5:01 AM No comments:

What is pi anyway? I'm sure you remember it from math in some formula you memorized, but do you really know what it is? Pi represents the relationship between a circle’s diameter (its width) and its circumference (the distance around the circle). Pi is always the same number, no matter the circle you use to compute it. In school we generally approximate pi to 3.14 in school, but professionals often use more decimal places and extend the number to 3.14159. You can learn even more about pi at Ask Dr. Math FAQ: About Pi.

One activity I loved doing with students was to ask them to bring in a can and lid that would soon be recycled. I always brought in a few extras so that there would be a variety of sizes. Each student was given a lid and directed to measure the diameter and circumference. Students then divided the circumference by the diameter. We recorded the results on the overhead and discussed them. Most were amazed to find that the results were nearly the same, allowing for some margin of error in measurement. This is a quick and fun and provides a meaningful way to introduce the concept of pi.

Are you doing anything special for Pi Day? Perhaps you could make a pi necklace or a pi bracelet. Can you find your birthday in pi? My birthday begins with digit number 7669! Since any day is a good day for poetry, you could try reading some pi poems. If you are looking for more ideas, visit the Exploratorium pi site or try this middle school math newsletter. Finally, you can visit my Pinterest board for additional resources.


Follow the board Circle Measures/Pi on Pinterest.
**Download your own version of the Pi poster (in green or purple!) at the Unihedron Pi Poster page.**
Posted by Tricia at 12:01 AM No comments:

Visualizing Pi Infographic
Posted by Tricia at 10:30 PM No comments:

Email ThisBlogThis!Share to TwitterShare to FacebookShare to Pinterest
Labels: math, Pi
Newer Posts Older Posts Home
Subscribe to: Posts (Atom)
Blogging since 2006 at The Miss Rumphius Effect and here since 2011.