History and Biography in Math and THE BOY WHO LOVE MATH

I've just finished teaching a course for teachers called Improving Elementary Math. As I think about what I might do differently next time and finally put away all my books and manipulatives, I find myself wondering how I might do more with biography in the elementary math classroom. 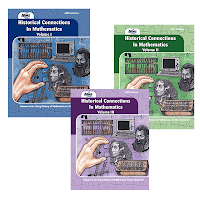 AIMS has long published a series of books on Historical Connections in Mathematics (3 volumes for the middle and high school audience). They also publish the series Mathematicians are People, Too (2 volumes for the middle school range, grades 5-9). Although the focus of these books is on the mathematicians and their stories, the mathematics are touched upon and explained in simple terms.


I don't have any answers yet, though I have quite a few biographies in my library.

Right now I'm quite fond of the book THE BOY WHO LOVED MATH: THE IMPROBABLE LIFE OF PAUL ERDOS, written by Deborah Heiligman and illustrated by LeUyen Pham. It begins this way:


There once was a boy who loved math. He grew up to be 1 of the greatest mathematicians who ever lived. And it all started with a big problem . . .

Heiligman takes readers through his early years, his life at home with Fraulein, his foray into school (which didn't last long), and his fascination for numbers.

When Paul was 10 "He fell in love with prime numbers." On a double-page spread featuring a Sieve of Eratosthenes on one side and an introduction to prime numbers on the other, readers learn a lot of math while learning about Paul. As Paul asked questions about numbers, so too can readers. Here's an excerpt.


Paul had a lot of questions about Prime Numbers.
Do they go on forever?
Is there a pattern to them?
Why is it that the higher up you go, the farther apart the prime numbers are?
Paul loved to think about prime numbers.

Paul did go to high school, and by the time he was 20, was already well-known around the world for his math. He lived unconventionally, traveling the world and staying with mathematicians, working problems with them, and living a very mathematical life.

There is an author's note in the back, describing her research and expanding on some of the stories in the book, as well as sharing bits that were not included in the text. There is also a lengthy note from the illustrator that describes many of the images and their meaning while outlining how math is included in the illustrations.

I think all kids would enjoy this story, but if I were still teaching young kids today, I'd slip it to the child who felt he/she didn't fit in, or the one with an unbounded love for a subject that other kids just didn't understand. Surely they'd be as inspired as I was by Uncle Paul's story.

After writing this I realized this was a perfect post for Nonfiction Monday. Head on over to Abby the Librarian for more on nonfiction this week.
Posted by Tricia at 10:07 AM