Constitution Day is 15 Days Away! 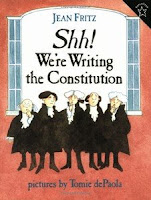 In the summer of 1787, the Constitutional Convention met in Philadelphia to write a new plan of government for our nation. The Constitution was approved by the Convention and signed on September 17th of the same year. Once signed it was sent to the states for ratification.

In 2005, a federal law established September 17th as Constitution Day. Here are some books and additional resources to help you celebrate the law of the land in your home or classroom. Please note that these are largely focused on the elementary level.

We The Kids, illustrated by David Catrow - Drawing on his strengths as a political cartoonist, Catrow uses a group of friends and a backyard camping trip to make
the Preamble to the Constitution understandable for readers by pairing the text with illustrations that help define phrases like insure domestic tranquility, common defense, and our posterity. For example, the illustration for "establish Justice" shows a dog wearing a helmet and standing guard while the kids play inside the tent.

A More Perfect Union: The Story of Our Constitution, written by Betsy Maestro and illustrated by Giulio Maestro - This book provides an overview of the Constitution, beginning with the initial decision to hold the convention and ending with the adoption of the Bill of Rights. The focus of the text is really on the basic decisions about the organization of the government which resulted in the Great Compromise. Also included is a final section that provides a list of the signers, chronology of events and dates, and simple summaries of the Articles and amendments.

If You Were There When They Signed the Constitution, written by Elizabeth Levy and illustrated by Joan Holub - Like other books in the If You Were There series, this one is organized around a series of questions. It begins with What is the Constitution? and then moves on to a bit of history (the war, the Declaration, the Articles of Confederation) in order to lay the foundation for understanding the document. This one answers many questions about who was involved, why certain choices were made, and how the process worked. 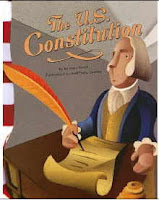 Picture Window Books publishes a series entitled American Symbols. In it you will find these books written by Norman Pearl and illustrated by Matthew Skeens:
Constitution Translated for Kids, written by Cathy Travis - Written at a 5th grade level, this book provides the entire text of the Constitution accompanied by a kid-friendly translation. In addition to the side-by-side translation, readers will find a timeline of events leading up to the writing of the Constitution, a glossary, information on Constitutional compromises, a bibliography and more.

Last But Not Least ... Schoolhouse Rock!