Everything around you is made up of matter. Matter is defined as anything that has mass and takes up space. The three different states of matter are solids, liquids, and gases, and each state has its' own characteristics. Our senses are always helpful when distinguishing one state of matter from another. Though solids, liquids, and gases all have their own unique characteristics, some matter can change from one state to another. This post provides resources that, in addition to characterizing each state of matter, show the effect temperature has on the different states of matter.

While this post focuses on the states of matter at the 5th grade level, this topic also appears in the Virginia Standards of Learning for 2nd grade.

Books
Mandy Mixes It Up With States of Matter: Solids, Liquids, and Gases. By Carol Marsh. 2008. 32p. Ga

llopade Intl., (9780635066688). Gr. 4-6.
This activity book is written from the perspective of a group of kids who call themselves the "Science Alliance. This advanced book presents definitions and explanations for the three states of matter, as well as various activities students can complete. 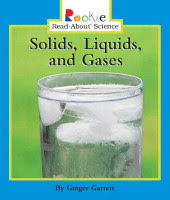 States of Matter: A Question and Answer Book. By Fiona Bayrock. Illus. by Anne McMullen, Ted Williams. 2007. 32p. Capstone Press, (9781429602273). Gr. 3-6.
This picture book introduces the composition of matter, the different states, and the effects of changing states.


What Is the World Made Of? All About Solids, Liquids, and Gases. By Kathleen Weidner Zoehfeld. Illus. by Paul Meisel. 1998. 32p. Harper Collins Publishers, (9780064451635). Gr. 2-5.
"Walls and blocks, dolls and socks. Milk and lemonade. Rocks and tress. All of these things are made of matter" (6). Water is matter that can easily change its state depending on the temperature; but most matter stays as one state. 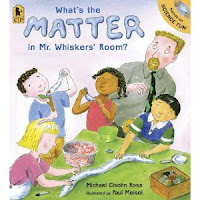 What's the Matter in Mr. Whiskers' Room? . By Michael Elsohn Ross. Illus. by Paul Meisel. 2007. 48p. Candlewick Press, (9780763635664). Gr. 2-5.
When Mr. Whiskers prepares to teach his science class about matter, he sets up various learning stations in the classroom and on the playground. Mr. Whiskers' students get to travel around to each station and experiment with the different forms of matter. Directions for setting up each learning station are included in the book.

Information for Properties of, and Changes in, Matter
At this site, teachers can gain background information on matter, get ideas from provided lesson plans and student activities. This site includes additional resources and websites for teachers who seek to better their understanding of, and ability to teach, matter.

States of Matter Game
This game will allow students to categorize words and phrases in relation to each state of matter. Students will learn how to associate different vocabulary with the different states.

For Teachers
Virginia Science Standards of Learning
5.4 The student will investigate and understand that matter is anything that has mass and takes pus space; and occurs as a solid, liquid, or gas. Key concepts include
a) distinguishing properties of each phase of matter;
b) the effect of temperature on the phases of matter