In Virginia, earthquakes are found in the Standards of Learning in grade 5. The resources in this post are most appropriate for grades 4 and 5. (SOL and Background information is at the end of post.)
Books
Anatomy of an Earthquake. By Renae C. Rebman. 2011. 48p. Capstone Press, (978-1429673631). Gr. 3-5.
This book teaches children where and how earthquakes form, how scientists predict them and how structures are built to withstand them.
Earthquakes

. By Franklyn M. Branley. Illus. by Megan Lloyd. 2005. 33p. HarperCollins, (978-0064451888). Gr. 4-5.
The book is a good book for children first learning about earthquakes. It discusses several of the major earthquakes since 1900, has an experiment with waves and discusses safety tips for earthquakes. 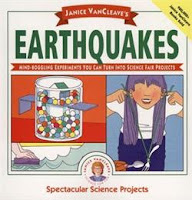 Janice Van Cleave's Earthquakes: Mind-Boggling Experiments You Can Turn Into Science Fair Projects. By Janice Van Cleave. 1993. 96p. Wiley Publishing, (978-0471571070). Gr. 3-5.
This excellent hands-on tutorial contains 20 simple experiments explaining earthquakes that kids can do with materials found around the home, plus dozens of additional ideas for turning the experiments into unique science fair projects. The experiments include learning about seismic waves with a friend using a piece of rope and about the Richter scale with a cardboard box, popcorn, and a yardstick. 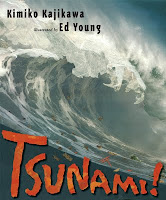 Tsunami!. By Kimiko Kajikawa. Illus. by Ed Young. 2009. 32p. Philomel Books, (978-0399250064). Gr. 2-4.
This is a folktale of the events of an earthquake, a fire, a tidal wave and selfless heroism, all packed into 32 pages, which guarantee that this story will hold the attention of even the most restless listeners. Four hundred villagers are saved from death when Ojiisan, a wealthy old rice farmer on the mountainside, feels tremors, sees the ocean recede and realizes a tsunami is coming.


Volcanoes and Earthquakes. By Susanna Van Rose. 2008. 72p. DK Children, (978-0756637804). Gr. 2-6.
The account starts with an overall perspective showing how volcanoes and earthquakes occur, with related events like steam vents and boiling mud. Effects on humans and attempts to measure and predict these events are treated. Like many of the "Eyewitness" series, it is a wealth of information with vivid descriptive pictures to capture the eye of the student.
Web Sites
Earthquakes for Kids.
This site by the Untied States Geological Survey is a exciting set of activities for children, including puzzles, games, animation, how to become an earthquake scientist, earthquake pictures and the science of earthquakes. The site is easy to use and a great resource.

Forces of Nature: Earthquakes, Volcanoes, Hurricanes and Tornadoes.
Outstanding website by National Geographic, highlighting key facts, pictures, discussions, other resources and the information regarding the worst of each of these incredible forces of nature.

How Earthquakes Work.
This site by the Discovery group, has videos, illustrations and short easily readable discussions about how earthquakes work, including plate tectonics, faults and seismology.

Website for the US Hazards Program.
This site is by the United States Geological Survey. The site gives real-time updates of all of the earthquakes that have occurred on earth in the past, including seismic measure, location, aftershocks, shakemaps, predictions and most interesting of all earthquake animations for the past seven days. This is a site that will surely get your students talking.

For Teachers
Virginia Standard of Learning
5.7 The student will investigate and understand how Earth's surface is constantly changing. Key concepts include
d) the basic structure of Earth's interior;
e) changes in the Earth's crust due to plate tectonics.

Posted by Meg Rutkowski at 1:47 PM