The solar system is an integral part of Earth Science! When learning about the solar system, students are introduced to the nine planets, their order and different characteristics of each planet. There is also a lot of focus on the sun and the moon and how everything rotates. The books in this selection would work best for students in grades 3-4, with one for younger students.
Books 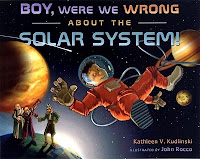 Boy, Were We Wrong About the Solar System!. By Kathleen V. Kudlinkski. Illus. by John Rocco. 2008. 32p. Dutton Juvenile, (978-0525469797). Gr. 4-5.
This fun book looks at the many mistakes and mishaps that have occurred in the past in regards to the planets and the solar system. It gives a lot of good information about how things were discovered and how some of the planets were named. The illustrations are also great!
Don't Know Much About The Solar System. By Kenneth C. Davis. Illus. by Pedro Martin. 2001. 48p. Harper Collins, (978-0064462303). Gr. 4-5.
This is a fun book to help students learn more about the solar system. Most of the pages contain general questions that students might have about the solar system, the universe etc. and answers them in ways that students can understand. All the planets are discussed and at the end they list off specifics about the distance of planets, duration of rotation etc. 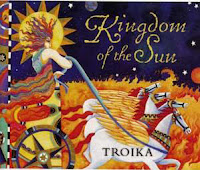 Kingdom of the Sun. By Jacqueline Mitton. Illus. by Christina Balit. 2001. 32 pg. Frances Lincoln Limited, (978-0711219472). Gr. 4.
I LOVED this book. Not only are the illustrations awesome, they talk a lot about the different Gods associated with each planet. They describe the planets in relation to the characteristics of each God associated with it. I think this would be a great book to integrate into a mythology or Greek/Roman unit. This book includes Pluto.
Our Solar System. By Seymour Simon. 1992. 72 p. Morrow Junior Books, (978-0061140082).
This is a pretty advanced book about the solar system and all the planets. There are lots of great pictures but also a lot of text. Each planet is discussed in detail and there is a nice Index in the back for students to use if they wanted to focus on one planet or another aspect of the solar system. This book includes Pluto.
The Planets in Our Solar System. By Franklyn M. Branley. Illus. by Kevin O'Malley. 1998. 32p. Harper Collins, (978-0064451789). Gr 3-4. 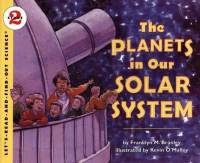 This book is a straight forward story about the solar system and each of the planets. This book was written for lower grade levels so there is not a lot of lengthy explanation but lots of characteristics and facts about the planets. The end of the book also lists two fun activities for students to do. This does include Pluto.

I found this website would be a good fit for a teacher. It is very text heavy with a lot of vocabulary but I thought it had a lot of great information. You could easily use a lot of the pictures. There are also several videos that would be useful in the classroom.
For Teachers
Virginia Standards of Learning
SOL 4.7 The student will investigate and understand the organization of the solar system. Key concepts include:
a) the planets in the solar system
b) the order of the planets in the solar system
Background Information from Curriculum Framework
Posted by Dee Kirchmier at 12:17 PM