Encouraging A Love of Math

Encouraging and nurturing the love of mathematics can be a challenge both at home and in the classroom. Here are some of the things I do to support reluctant math lovers of all ages.

SOLVE PUZZLES.
By puzzles I mean not only logic puzzles and Sudoku, but jigsaw and geometric puzzles. Jigsaw puzzles help develop skills in orientation and visual discrimination. Geometric puzzles also help students to think deeply about the orientation of shapes in space and how they can be put together to make new shapes. Here are some of the puzzles I like to provide.

The book Chasing Vermeer by Blue Balliett is filled with pentominoes. When a Vermeer painting is stolen in transit from the National Gallery in Washington D.C. to the Chicago Institute of Art, Petra and Calder become intent on finding the painting and solving the mystery. Calder carries a set of pentominoes in his pocket at all times, so be sure to print your own set to use while reading this one! Learn more about the book, the author, and the other books in the series at the Scholastic site.


You can find more resources for dissection and shape puzzles on my Pinterest board for  Tangram/Pentomino/Shape Puzzles/Mazes. 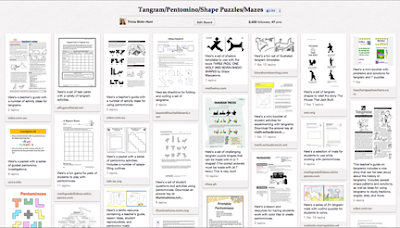 You can find several boards devoted to number and logic puzzles at my Pinterest site.

Two great sites with a wide range of number puzzles (printable and online) are Krazydad and Conceptis Puzzles.


CONNECT MATH AND ART.
Using art in math class is one way to develop visual and spatial skills, as well as pattern recognition and basic geometry skills.

While you're folding you may want to check out The Origami Master by Nathaniel Lachenmeyer and Lissy's Friends by Grace Lin (both picture books), as well as Fold Me a Poem by Kristine O'Connell George (poetry). All these books focus on origami. 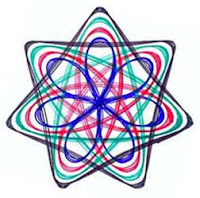 PLAY BOARD AND STRATEGY GAMES.
Playing games is a great way to develop problem-solving skills as well as practice skills in arithmetic. I had a game corner in my classroom where students could play games when their work was finished. We also had game day on Friday for 20-30 minutes if we'd had a good week. While I know most of these can now be played electronically, there is something to be said for actually sitting down on the floor with kids, rolling dice, and moving pieces around a board. Some of the games on my shelf include:

READ BOOKS THAT CONNECT TO MATH.

I've already mentioned a number of books that connect to the ideas shared above. Using children's books is a great way to explore math with kids. Here are some titles that include mathematical content or challenging puzzles that will encourage children to stretch their mathematical muscles in a different way.

The Phantom Tollbooth by Norton Juster - Take a journey with Milo, a young boy who drives through a magic tollbooth into the Lands Beyond and embarks on a quest to rescue the maidens Rhyme and Reason from exile and reconcile the estranged kingdoms of Dictionopolis and Digitopolis. This is a great book for kids enamored of words and/or numbers. If you are a fan, check out The Annotated Phantom Tollbooth. 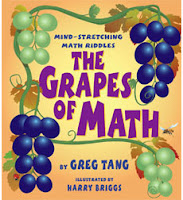 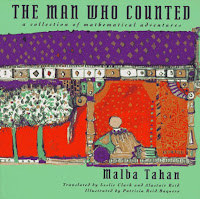 The Puzzling World of Winston Breen by Eric Berlin - Winston sees puzzles everywhere. Imagine his dismay when he gives his sister a box for her birthday, only to learn that it has a secret compartment containing four wood sticks with puzzle clues. Readers will solve puzzles right along with Winston and his sister Katie as they try to solve the mystery. You can download puzzles from the Winston Breen books to try them out. There are two sequels to this book, The Potato Chip Puzzles and The Puzzler's Mansion that are also highly entertaining. 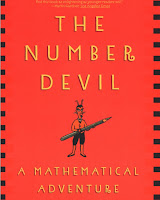 
Alright, that's it for now. I hope you'll find these ideas helpful in your classroom or at home. If you have a great idea of your own for encouraging a love of math, please share!
Posted by Tricia at 5:28 PM