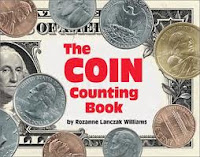 oin Counting Book. By Rozanne Lanczak Williams. 2001. 32 p. Charlesbridge, (0881063258). Gr 2-3
This book practices counting coins and grouping. It also shows the equivalency between different values of coins, for example that five pennies and a nickel equals one dime. The book shows the values using coins laid out, the numeral value in terms of coins for example one quarter, and the value in terms of cents 25¢. The book uses pictures of real coins and rhyming.

Deena’s Lucky Penny. by Barbara DeRubertis. Illus. by Joan Holub and Cynthia Fisher. 1999. 32 p. The Kanes Press, (9781575650913). Gr 1-3
This book tells the story of how Deena goes from one penny to a dollar by adding coins. She says the equations out loud and shows them in numeral form. She also trades in coins, which shows equivalency between coin values. The pictures are cute and there is a money chart in the back of the book.

Making Cents; The Nuts and Bolts of Money and a Whole Lot More. By Elizabeth Robinson. Illus. by Bob McMahon. 2008. 32 p. Tricycle Press, (9781582462141). Gr. 2-3
This book starts from a penny and makes exchanges all the way up to a hundred dollar bill. It begins by describing how a penny can buy a nail and slowly they collect enough money to construct a party. The story describes what the coins look like and the exchange values between the different coins. It shows the coin values in terms of the construction tools. The book illustrates the equivalency in multiple ways such as two dimes and a nickel equals a quarter as does five nickels or twenty five pennies.

The Penny Pot. By Stuart Murphy. Illus. by Lynn Cravath. 1998. 40p. HarperCollins Publishers, (9780060276065). Gr 2-4
This book practices adding and subtracting using money values. As Jessie waits to have enough money to get her face painted, other customers come and add up their money. They then count to see how much money they have leftover to put in the pot. This practices adding up coins with different values. The pictures show the coins and use numerals to add the values together. In the back of the book there are additional activities for kids to play with coins.
26 Letters and 99 Cents. By Tana Hoban. Illus. by the author. 1987. 32p. HarperCollins Publisher, (0688063616). Gr. 2
This book does not contain words, but shows the numeral and the equivalent value in coins. For numbers that can be expressed using more than one coin combination it shows the different ways. The book counts all the way up to thirty and then skip-counts by fives to fifty and then skip-counts by tens to ninety.
Web Sites
Money Desk
A practice drill where students drag coins onto a desk to create a specified amount.
Counting Coins
Students count the number of coins. This can be adjusted to different grade levels.
Coin Worksheets Creator
Allows teacher to create custom worksheets that test student's knowledge on different types of coins and counting.
Coin Poetry
A great lesson plan that uses the Shel Silverstein poem Smart as an introduction to the different values coins have.

The Coin Song
A song that shows the relationship between coins and practices skip counting.

For Teachers
VA Standards of Learning
2.10 The student will:
a) count and compare a collection of pennies, nickels, dimes, and quarters whose total value is $2.00 or less;
b) correctly use the cent symbol(¢), dollar symbol($), and decimal point(.).

Background Information from the Curriculum Framework
Posted by Michelle at 11:51 AM