Number sense is the ability to use numbers appropriately, to use them in computation, and to understand what they represent in terms of value. It is an arduous process for young learners. Lots of practice and use of the following resources can help kindergarteners and first graders learn the processes. 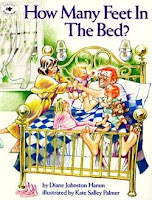 This book tells a story about a girl who counts feet as her family hops in and out of bed. Her family consists of two parents and three children, so there are a few combinations of numbers she has to come up with. A few different skills are put to use in the text; counting by two's and basic addition and subtraction. Therefore, it would be most helpful for first graders.

This book is about a class project in which students plant trees. At first, they focus on the existing tree. They count its inhabitants and think about different types of trees and all they do for the environment and how wood is put to use. Then the class plants ten baby trees. This book provides a strong narrative to get students involved and also teaches them a little science. Seasonal changes to trees are shown on the inside cover of the book and a lot of attention is paid to the effects that trees have on ecosystems and environments. The book would be useful in either kindergarten or first grade, though attention would need to be paid to which students would benefit from using it in a group discussion or those who could use it independently.

This book illustrates the meaning of zero in a few different instances, all of which students should find easily relateable. Since counting from 0 is part of the first grade SOL's and is a bit of a hard concept to grasp, this book would be better suited for first grade use.

This counting book features numbers and their illustrations with an Asian twist. Numbers are spelled out in words and illustrated with the matching amount in forms like boats, friends and horses on a merry-go-round. The book is simple enough to be used in either a kindergarten or first grade classroom. 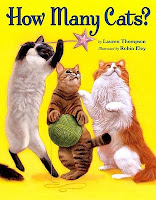 This counting book chronicles the play of a number of cats and a dog. The cats come in the dog's house, up to twenty, and then leave group by group. The story is simple and direct enough for either kindergarten or first grade use, but would be especially helpful in first grade because the last few pages could prompt a discussion of how many cats are left once they start leaving.

Number Sense Game
This game allows students to practice making larger numbers than the sample given. It is similar to the Number Top-it game but can be played by only one student. The website is good for independent student use because it is through PBS and doesn't have any external ads or inappropriate information.

Comparing Numbers
This game allows students to practice identifying groups of more or less. It does not have any external links or inappropriate information so it is safe for use in the classroom. It showcases links to other sections of the website with games focused on other necessary skills like counting.


Five Frame Game
This game allows students to practice numbers one through five by using a five frame and typing in how many sections of it are filled. It would help students recognize amounts and match them to the appropriate numbers. For added practice with numbers students could write the spelled out number on their own paper when they answer the questions.

Bumble Numbers
This game allows (first grade or advanced kindergarten) students to practice basic addition. It's a safe website for students because there aren't any external links or distractions.

Skip Counting
This game allows students to practice skip counting by two's. It prompts students with sets of two and times each response to encourage subitization and skip counting. The game would need to be played under supervision, as there is advertising space on the web page.

SOL Information
K.1 The student, given two sets, each containing 10 or fewer concrete objects, will identify and describe one set as having more, fewer or the same number of members as the other set, using the concept of one-to-one correspondence.
K.2 The student, given a set containing 15 or fewer concrete objects, will
a) tell how many are in the set by counting the number of objects orally;
b) write the numeral to tell how many are in the set; and
c) select the corresponding numeral from a given set of numbers.
K.3 The student, given an ordered set of ten objects and/or pictures, will indicate the ordinal position of each object, first through tenth, and the ordered position of each object.
K.4 The student will
a) count forward to 100 and backward from 10;
b) identify one more than a number and one less than a number; and
c) count by fives and tens to 100
1.1 The student will
a) count from 0 to 100 and write corresponding numerals; and
b) group a collection of up to 100 objects into tens and ones and write the corresponding numeral to develop an understanding of place value.
1.2 The student will count forward by ones, twos, fives and tens to 100 and backward by ones from 30.
Posted by Katie R at 4:14 PM