Number Sense describes an intuitive feel for numbers and their relationships or patterns. Since number sense is something that develops over time, it is imperative that teachers provide students with a variety of materials and resources from a young age, which pertain to this concept. Literature and technology add a great way to provide many different experiences with number, just take a look below! 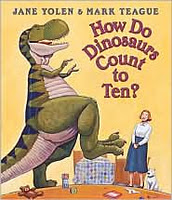 How Do Dinosaurs Count to Ten? By Jane Yolen. Illus. by Mark Teague. 2004. 12p. Scholastic Inc, (978-043964940). Gr.K-1.
Yolen's entire series is a hit with children, but this one is perfect for children who are learning how to count. It shows dinosaurs in the same learning situation that the students are in and tells them a little bit about this prehistoric creates while they count. Overall this book will attract students and make them feel comfortable while they learn which is extremely important. Missing Math: A Number Mystery. By Loreen Leedy. Illus. by the Author. 2008. 32pp. Marshall Cavendish Children's Books, (978-0761453857). Gr.K-1.
This book is very creative because it focuses around the question of what life would be like without numbers! Their are two animals who run around trying to replace numerals that have been mysteriously stolen, the whole time moaning about all of the problems that having no numbers creates. I think students would really enjoy locating the hidden numbers throughout this book as well as brainstorming the countless ways that numbers affect out daily lives. 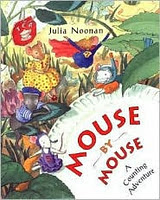 Mouse by Mouse: A Counting Adventure. By Julia Noonan, Illus. By the Author. 2003. 48pp. Penguin Young Readers Group, (978-0525468646). Gr. K.
During this book ten little mice get together to play all day. These mice have many adventures which are all beautifully illustrated, allowing children to count the mice, who all display their number labeled on the front of their colorful dresses or shirts. This will keep students focused on numbers while also helping them each develop one-to-one correspondence and stable ordering skills. 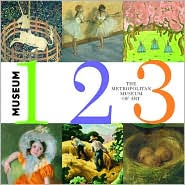 Museum 123. By The NY Metropolitan Museum of Art. 2004. 48pp. Little Brown Books for Young Readers, (978-0316160445). Gr. K-1.
This book gives a fresh approach to teaching children numbers because it uses famous works of art to help them practice counting. Each number has four pages of masterpieces devoted to it, some depicting the number while others simply uses fun objects in a set to display the specific numeral. I think this picture book would add a little culture to your students experience in learning numbers which may really intrigue them. 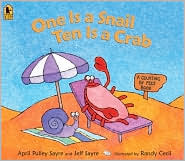 One Is a Snail, Ten Is a Crab: A Counting by Feet Book. By April Pulley Sayre & Jeff Sayre, Illus. by Randy Cecil. 2010. 40pp. Candlewick Press, (978-63647902). Gr. K-3.
This book is great because it teaches numbers and counting by using the number of feet that different animals have. It starts off with a snail, who has one foot, and after then the numbers move up in increments of ten all the way up to one hundred! If you are using this book for kindergartners I think it would work well if you cut out the end and focused on counting to ten, however it also helps front load counting for students and so you may want to read the whole book. Either way it is a creative way to count which uses real world examples that will interest children while they learn or simply review these major concepts.
Web Annotations
Count Us in: Game One
I like this website because it offers a game in which children are told how many sheet they have in one area and are asked to move a random number of them into another area. I believe it shows counting in a different way then students are used to and really will be something that they enjoy.
Fishin' Mission
I really like this website because it times students on their ability to catch swimming fish while they count and place the into a net. The fisherman asks for a different amount to be placed into his net each time and slowly it gets more difficult, which means this game will help students count while also giving them some confidence in the beginning in order to keep them playing.
Fishy Count
This website is great for students who want to review counting sets of objects. During the game a school of fish swim onto the screen and three numerical options show up which the student can choose from in order to decide how many fish their are. I really like that this site gives children options while they are trying to count so that less confident students feel more comfortable and can simply focus on forming a good number sense.
Numbers to Write and Color
This website is very helpful for teachers because it offers free printouts for the numbers 0-9. These worksheets are special because they display the numbers in multiple ways while also providing students with lines to practice writing out each. For students just learning the numbers this website could really help.
Stacker
This website also offers a game to help student stable counting abilities, however it does it in a very different way. In this game students are given a set of six numbered boxes and are told to place them in order on a place outlined on the floor. The mouse becomes a crane, which will really attract young students and the boxes numbers start at random numbers so they are kept on their feet. It is also timed and set up to get more difficult which understandably will attract and hold children's attention.

Posted by Emily McCurrach at 9:58 PM