One of the points of school is to create informed citizens. In Kindergarten students are introduced to the concept of recycling. Recycling is one of the most important lessons a student can learn because it is a lesson that they can implement right away, and by applying this lesson to their life the students will have a beneficial impact on the world rather than a detrimental impact. So, it is vital that teachers work diligently and effectively during the lesson of recycling. 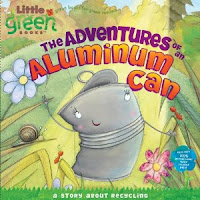 
Watch the life of an aluminum can from the its beginning as an bauxite rock, through the manufacturing line, through the store shelf, through the garbage can and finally to the recycling plant. The story is told through the humorous perspective of the aluminum can. This is a great way to teach little kids the importance of recycling with an empathetic and funny tone. 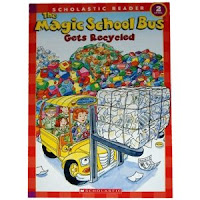 The Magic School Bus series has always been a favorite of mine. The kids in the class are like any other kids. The wild Mrs. Frizzle is the teacher I have always wanted to be. Her adventures with her class explain everything with great detail and most importantly, pizazz. In this particular one her class holds a recycling drive. When Phoebe loses her necklace, the class in their bus dives into the recycling center and learn about the process of recycling. 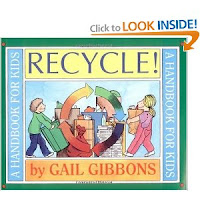 Recycle! A Handbook for Kids! by Gail Gibbons. (1996). (32p). Little Brown Books for Young Readers. (978-0316309431). Gr. K-4.
With large pictures and brief descriptions, Gail Gibbons describes how to recycle, why its necessary, and its benefits. The books message is to recycle, an easy and fun habit, in order to create a safer and healthier world. This is a great book to introduce the idea of recycling to kids. 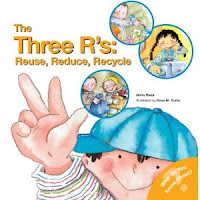 Through colorful, big illustrations and easily comprehensible text The Three R's: Reuse, Reduce, Recycle is great for little kids to be introduced to the concept and importance of recycling. The book tells  children that they and their families should avoid waste and be environmentally conscious. The end of the book includes four pages of activities for children. The following two pages are for parents describing tips for recycling and providing more information on the topic. This is a great book to suggest to parents to read to their children. 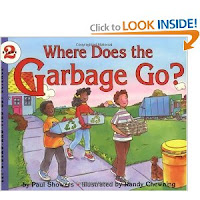 Where Does the Garbage Go? by Paul Showers. Illus by Randy Chewning. (1994). 32p. Collins. (978-0064451147). Gr. K-4.
This books follows the trail of a garbage truck as it picks up garbage from in front of the homes, to the landfill, to the incinerator, and finally to the recycling center. Where Does the Garbage Go? Is filled with charts, graphs, and diagrams to help students understand that we have to much trash and we need to create solutions, like recycling, to keep from coming up with so much trash.


Websites
Green Planet for Kids
If you need to teach students about recycling, look no further. This website has all you can think of concerning recycling in a friendly and fun set-up for kids. It includes a plethora of recycling facts concerning water, electricity, heating, cooling, reduce/reuse/recycle, yard and garden, transportation, and environmental choices. Every fact comes with a fun comic! There are forums about reduce, reuse and recycle for students to read and respond to if they wish to create a login. Resources for ePostcards, Green news, and ecolinks are included. Games are also being created and coming soon!

Sesame Street "Recycling Blues"
Here is a music video about recycling. It is hand drawn and colorful. The music is upbeat and jazzy. It is sung by recycled objects singing about how they used to be something broken but now they went through recycling and now they are back as something new!

Sesame Street: Recycling Newspapers
Here is a Sesame Street video about recycling newspapers. This video describes the recycling process that newspaper goes through. Much of the video is in fast forward so you can see the process quickly. The whole video is narrated by a little girl, probably the same age as the kindergartners, or just about. Music is played in the background to keep the children engaged visually and orally.


Sesame Street: Ronnie Trash "It's Yours and Mine"
Sesame Street's character Ronnie Trash laments about how people need to recycle and stop throwing trash where it shouldn't be thrown. Ronnie Trash drives around recycling and points out people are throwing away trash in the rivers, in the streets, in the parks, and in the fields. The whole video is take-off of Johnny Cash.


Sesame Street Video About Recycling Aluminum Cans
Here is a Sesame Street video describing how aluminum gets recycled. The whole video is narrated by a little girl. Kindergartners will relate to this video because the narration is done by a little girl probably about there age. Therefore they will not be intimidated and will more likely be able to learn from it.

For Teachers
K.10 The student will investigate and understand that materials can be reused, recycled, and conserved. Key concepts include:

a) materials and objects can be used over and over again;
b)

everyday materials can be recycled; and

c) water and energy conservation at home and in school helps preserve resources for future use.

The concepts developed in this standard include the following:

Posted by Russell's balloons at 12:40 PM