Children are often curious about how things work and why things happen.  In fact, children notice the differences in climate and activities in each season and may ask questions such as, "What are the different seasons?" and "Why do we have different seasons?"  As an educator, you can explain the four seasons to a child in many ways!  The following books and web sites are great resources to teach the four seasons to first graders.

Using lyrical text and beautiful photographs, this book introduces young readers to the particular joys of each and every season.  "I love spring," the text begins, and in simple poetic phrases, a speaker describes the unique pleasures of the season.  The accompanying photos show close-ups of eggs and flowers, rows of newly sprouted plants, and smiling children under an umbrella.  In the following spreads, the speaker describes summer, fall, and winter by emphasizing each seasons' special wonders.

A little girl introduces the four seasons as she observes them at home on a farm.  Each seasons brings changes in the natural world, as well as her daily activities.  The first-person text is simple and childlike, a tone reflected in the clearly depicted in the colorful collages. The book concludes with an appended note, which acknowledges that the story takes place in the northeast, where the seasons differ dramatically, and encourages children to look for local changes, which may be more subtle. 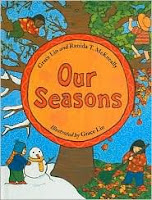 Pairing haiku verses on one page with explanations of seasonal changes on the other, this book provides young readers with the science behind the seasons.  For example, the text answers the questions, What makes the wind?  Why do leaves change color? and Why do I see my breath?  for autumn.  Further pairings address frost, suntans, thunderstorms, and pollination, among others.  In general, the authors effectively tie together poetry and the facts. 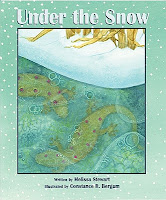 This book introduces young readers to the concept of hibernation.  Furthermore, the book touts that under the snow lies a hidden world.  Stewart takes readers on an informative journey, describing how snakes, spotted salamanders, beavers, and red-spotted newts, "spend their days" during the winter months.  Additionally, the author presents fascinating facts that make the spare text intriguing and fun.  This is a great read-aloud for units on winter and animal habitats! 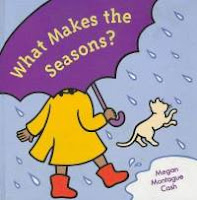 The changing seasons are clearly depicted as an African-American girl and her cat explore the wonders of each season.  Using simple language, rhyming text and poses basic questions and answers for each season such as, Why do seeds sprout in spring?  Why do plants grow so well in the summer?  Why do leaves fall to the ground in autumn?  What makes snow? Overall, this is a great choice for a read aloud and enticing emergent readers!

The following web sites are a great way for students to build their understanding of weather and seasonal changes:

The Four Seasons
The game requires students to match different pictures with the correct seasons.

National Grid for Learning: Part I
This interactive game tests students' knowledge of the seasons.  It requires students to sort the months of the year, according to the season.

Seasons of the Year
This brief video introduces young students to the four seasons.  The video provides information about the seasonal changes, as well as the effects on animals, humans, and plants.

Sticks and the Seasons Game
This interactive game provides students with a chance to explore each season.


For Teachers
Virginia Standards of Learning
Standard 1.7 The student will investigate and understand weather and seasonal changes.  Key concepts include
(a) changes in temperature, light, and precipitation affect plants and animals, including humans;
(b) there are relationships between daily and seasonal changes; and
(c) changes in temperature, light, and precipitation can be observed and recorded over time.

Posted by Alyshia Robinson at 3:40 PM