Introduce students to the theory of evolution in the 3rd grade through the unit of adaptations. The 3.4 section of science SOLs  for third graders explores the ideas of how animals adapt to their environment behaviorally and physically in order to survive. 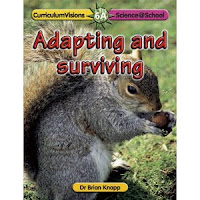 Adapting and Surviving by Dr. Brian Knapp. Illus by David Woodroffe. (2003). 24p. Grolier Educational. (32769076747999). Gr. 3-6.
This highly descriptive book discusses how different animals and plants adapt to survive in woodlands, ponds, rivers, meadows, rock pools, mountains, and deserts. It also includes the changes plants and animals undergo in order to live through seasonal changes. One section that is in this book and not several others for thirds graders discusses how plants have adapted to defend themselves.  Adapting and Surviving is a bit text heavy, but a glossary is included at the beginning of the book to help students with vocabulary and a table of contents is also included to help students sift through it to find the information they need quickly. I would not recommend reading this book to the class, but rather offer it to students if they would like to do research. 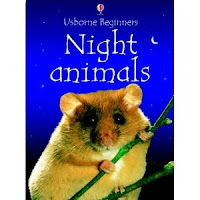 Night Animals by Susan Meredith. Illus by Patrizia Donaera and Adam Larkum. (2003). 32 p. Usborne Publishing Ltd. (32769080631692). Gr. 2-6.
Night Animals is a picture-filled book that describes how nocturnal animals have adapted in order to survive. It shows how not only have nocturnal animals adapted to seeing at night but they adapt in different ways like how they hunt,  have improved hearing, eyes adjust during the day, can have larger eyes, cool off during the day through mud baths or holes in the ground, sleep during the day, use camouflage, use sound waves, make noises to attract, to communicate with their family, or to keep outsiders away, or use light to send messages such as fireflies. A glossary is included at the end to help students learn the terms nocturnal, hunt, snout, claw, burrow, male and female. Websites are also included to find additional information. 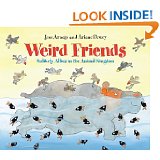 Weird Friends: Unlikely Allies in the Animal Kingdom  by Jose Aruego and Ariane Dewey. (2002). 40p. Gulliver Books Harcourt, Inc. (32769069405829). Gr. 2-6.
This is one of my personal favorite finds for this unit. Weird Friends: Unlikely Allies in the Animal Kingdom is all about symbiotic relationships. Symbiotic relationships is a really good example of adapting to the environments because animals are helping each other so they can both survive. This book has adorable drawings and clear descriptions about the symbiotic relationships between the clown fish and the sea anemone, the rhino and the cattle egret, the blind shrimp and the goby, the ostrich and the zebra, the red phalaropes and the sperm whale, the red ants and the large blue butterfly, the hermit crab and sea anemone, the impalas and the baboons, the horse mackerel and the portuguese man-of-war, the forest mouse and the beetles, the hippo, the oxpeckers and the black labeo fish, the wrasse and the google-eye fish, the tuatara and the sooty shearwater, and finally the water thick-knees and the crocodile. The pictures are large enough and the descriptions short enough that it is the perfect book to read to the class aloud. 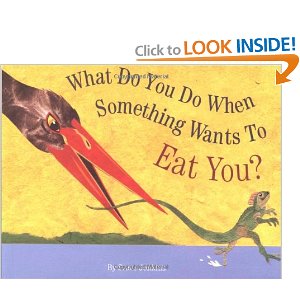 What Do You Do When Something Wants To Eat You? by Steve Jenkin. (1997). 16p. Houghton Mifflin Company. (32769048038196). Gr. 2-6.
Every animal has a defense tactic to keep itself from being eaten. Some animals use camouflage to hide, some run away really quickly, and some split their own tails into wiggly little pieces. These defense skills  can be either instinctual or learned behavior. They are how animals have adapted to keep surviving despite living amongst their predators. What Do You Do When Something Wants To Eat You? describes the escape tactics of an octopus, bombardier beetle, puffer fish, glass snake, pangolin, basilisk lizard, hog-nosed snake, clown fish, hover fly, gliding frog, silkmoth, avanese, flying fish, and finally the blue-tongued skink. The pictures are big enough and the descriptions short enough that it is perfect to read aloud to the class. 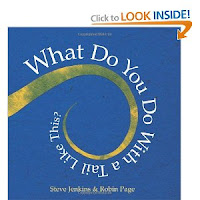 What Do You Do With a Tail Like This? by Steve Jenkins and Robin Page. (2003). 32p. Houghton Mifflin Company. (32769076278375). Gr. 2-6.
Animals' physical appearances often change through evolution so animals can survive in their environment. Several examples of these adaptations are shown in What Do You Do With a Tail Like This? The book is set up in a way that two pages will show a certain body part of several animals and will ask "What do you do with a ______[insert name of body part] like this?" The next page will show exactly why those animals have that type of body part and how it helps them survive. The pictures are large enough and the descriptions short enough that it is perfect to read aloud to your class. The read is easy but it is filled with information that you might never have known yourself!
Websites
Arctic Adaptation Quiz
See if you can answer all the frog's questions about the adaptations of animals in the arctic. This is another Eco Kids Game. Eco Kids is a reliable site made for kids. This site also has homework help if students wish to use it.

Animal Adaptations Eco Kids Game
Beat the clock! Pick the correct three out of four adaptations for the chosen animal before the clock runs out!
Deciduous Forest Animal Adaptations
Read up on deciduous forest animals and the adaptations they have gained by living in their environment. This website also includes an introductory lesson on adaptation by describing how humans adapt to different weather climates. It describes the difference between physical and behavioral adaptation. This site includes a teacher resource section under "Teacher Lounge" which leads to a glossary, lesson ideas, and further activities.
National Geographic for Kids: Search for Your Favorite Animal
This National Geographic website for kids provides pictures and descriptions of certain animals and how they have adapted to their environments. A plethora of animal options are provided. These animals can be sorted on the site by the habitat they live in or whether or not they are mammals, birds, invertebrates, fish, bugs, birds, insects or even dinosaurs.
Plant and Animal Adaptations to the Desert
Read about the major ways hat plants and animals adapt to desert life in Southeast Arizona. Some of the information might be a little advanced for third graders, but if the teacher explains it then the site can certainly be used.
For Teachers

3.4      The student will investigate and understand that adaptations allow animals to satisfy life needs and respond to the environment. Key concepts include
a)            behavioral adaptations; and
b)            physical adaptations.


Posted by Russell's balloons at 2:13 PM