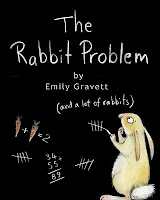 The back cover of this book includes the following statement.

The Rabbit Problem
This book is based on
a problem that was solved in
the 13th Century by the
Mathematician Fibonacci,
but it is NOT (I repeat NOT)
a book about math.
It is a book about rabbits. . .
Lots of rabbits!

Emily Gravett may not see this as a math book, but I respectfully disagree and see this as a terrific book for a math lesson or two!

The first thing you'll notice about this book is that it has a hole drilled through the right edge about halfway down. When I first saw this I was outraged! I couldn't believe I'd been sent a damaged book! I was a bit embarrassed when I opened the book to realize that it was set up like a calendar, complete with the holes from which a calendar would normally hang.

The book opens in January with one lonely rabbit sitting in a field. A field with a signpost that reads Fibonacci's Field / Population 1. Next to this sign is another that reads NO Rabbits may leave the field. This is, of course, the top portion of the calendar which usually contains a picture. The bottom portion is the January calendar. Under the name of the month is the subtitle The Lonely (adjective inserted with a caret) Rabbit Problem. Affixed to the calendar page is an invitation that reads:


Join me!
Where?
The Field
Why?
To be my friend
When?
Right now!
from Lonely Rabbit

In February, readers find two rabbits, huddled together and covered in snow. The population of the field now is 1 pair. The subtitle for the month is The Cold (adjective inserted with a caret) Rabbit Problem. Attached to this page is knitting pattern for a rabbit hoodie!

You can see where this is going, right? In March there are 2 pairs of rabbits, in April 3 pairs, in May 5 pairs, and so on. By November the calendar and field are covered by a mass of rabbits, 89 pairs in all. (I didn't count them, but I was tempted!) I won't spoil the ending by telling you about December. Let me just say that it is very satisfying.

In part this book reminds me a bit of Gravett's book Meerkat Mail, as a number of the calendar pages have small booklets to open and explore.  I'm quite taken with the ration book in May and The Fibber (newspaper) in July.

There is much to explore in this book. While not a traditional read aloud (the tale is largely wordless), the story told through the illustrations and artifacts on the calendar is humorous and vastly creative.

As to ideas for math lessons, you'll find the calendar here, patterns in Fibonacci numbers, graphing (in the ration book and The Fibber), tally marks of the carrot count in September (why not tally count the rabbits?), and more. HIGHLY RECOMMENDED.
Posted by Tricia at 3:13 PM

Email ThisBlogThis!Share to TwitterShare to FacebookShare to Pinterest
Labels: math