Books
Fraction Action. By Loreen Leedy. Illus. by the author. 1994. 31p. Holiday House, (0823411095). Gr. 1-3
This book shows Miss Prime teaching her class about fractions. They learn about parts of a whole, part of a set, and subtracting fractions. The illustrations are fun to look at and the author asks questions to the reader along the way to have them thinking about the fractions used in the story.
Inchworm and a Half. By Eli 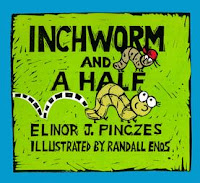 nor Pinczes. Illus. by Randall Ends. 2001. 32p. Houghton Mifflin Co., (9780395828496). Gr. 2
Inchworm is measuring vegetables but he is too big for some objects to measure exactly so he uses smaller worms to help him measure which represent fractions. The book teaches the relationship between halves, thirds, and fourths.
Jump, Kangaroo, Jump. By Stuart Murphy. Illus. by Kevin O'Malley. 1999. 29p. HarperCollinsPublishers, (0060276142). Gr. 2.
Kangaroo is participating in different field day activities at camp. As they split into different size teams for the different events it shows the fraction of animals on each team in comparison to the total amount of campers. This book shows the fractions with pictures and numerals.
Polar Bear Math. By Cindy Bickel and Ann Nagda. 2007. 32p. Macmillan, (0312377495). Gr 2-5
This book tells the true story of two rescued polar bear babies and how they grew up. The right hand pages tell the story of their lives while the left hand shows different fractions and how they relate to their story. The book talks about equivalent fractions, common denomi 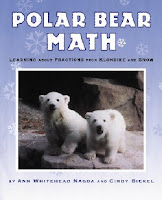 nators, and adding fractions. The book includes adorable photographs of the polar bears as they grow up.
Whole-y Cow Fractions are Fun. By Taryn Souders. Illus by Tatjana Mai-Wyss. 2010. 32p. Gale, (1585364606). Gr. 1-3.
This book includes a cow who does different things. In all of the situations the author asks a question that relates to fractions which helps with practice and could easily be used as a whole class activity. There is an answer key in the back of the book.

Web Sites
Fishy Fractions
A fun game where students have to match up the fraction with the appropriate picture or numerals in order for the seagull to eat its fish.
Grampy Strict
Students uncover Grampy by estimating fractions and they get to practice writing fractions in lowest terms.
Name the Fraction
An activity where students label the picture according to the fraction it represents.
Fraction Tutorial
A simple, colorful powerpoint tutorial that teachers can use for helping student relearn or master fraction concepts.
Jump Kangaroo Jump
A lesson plan about fractions that is taught with the book Jump Kangaroo Jump.

For Teachers
VA Standard of Learning
2.3 The student will
Background Information from Curriculum Framework
• A fraction is a way of representing part of a whole (as in a region/area model) or part of a group (as in a set model).
• In each fraction model, the parts must be equal (i.e., each pie piece must have the same area; the size of each chip in a set must be equal). In problems with fractions, a whole is broken into equal-size parts and reassembled into one whole.
• Students should have experiences dividing a whole into additional parts. As the whole is divided into more parts, students understand that each part becomes smaller.
• The denominator tells how many equal parts are in the whole or set. The numerator tells how many of those parts are being described.
• Students should have opportunities to make connections among fraction representations by connecting concrete or pictorial representations with spoken or symbolic representations.
Posted by Michelle at 2:44 PM