"We are all connected to each other biologically to the earth chemically to the rest of the universe atomically"
-Degrasse Tyson.
This post is all about the solar system and its planets. Below is a great list of books to use in order to spark your child's mind with wonder. We are all connected in the solar system and the root to many answers mankind seeks is out there. Lets get our children interested in the planets early on so, that they can one day explore the unknown that is the almighty universes.
Books
The Earth Book. By Todd Parr. 2010. 40 p. Little, Brown Books for Young Readers, (978-0316042659) Gr. 4-6.
This is a great book that talks about things we can do to take care of the earth. While this book teaches children about the basics of the book it has a strong message behind it. It teaches them to recycle and that every action no matter how small is a small step towards persevering the earth. This is a good warm up to teaching about the solar system as well because it starts with the basics. This is earth, it has a moon, People live on earth, but we must take care of the earth because its the only planet that we know of that harbors life. This is a good starter book when you want to break the ice into the solar system and how earth is important to humans talk.

Exploring the Solar System: A History with 22 Activities for Kids. By Mary Kay Carson. 2008. 176 p. Chicago Review Press, (978-1556527159) Gr. 5-6.
Can we say COOL! This paperback book introduces kids to our friendly solar system and its planets. It even traces the history of humans exploration into space. This book even comes with cool activities for you and your child to do. This is a great bonding book for you and your children to both learn about space together. It has plenty of pictures and is an easy read, but still packed with plenty of information! Get excited!

Comets, Stars, the Moon, and Mars: Space Poems and Paintings. By Douglas Florian. 2007. 56 p. Harcourt Children's Books, (978-0152053727) Gr. 3-6.
This book looks at the astronomy through the words of poetry. Each poem is a scientific look at a different part of our solar system. This is a great ice-breaking book to get kids thinking about the solar system. This book also includes great drawings and real pieces of art to look at in regards to the solar system. Its a beautiful book. Once again a great book to get them thinking about what space looks like. 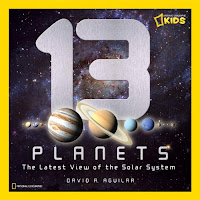 13 Planets: The Latest View of the Solar System. by David A. Aguilar. 2011. 64 p. National Geographic Children's Books, (9781426307706) Gr 5-6.
This book looks at all 13 planets that's right I said 13 in their newly created categories. This book takes a photo realistic computer art look to profile each planet. This book profiles the recent actions of the International Astronomical Union, and in the regards to this book they have just put every other solar system book out of date. This is a great book for an up to date look at the way we observe the space around us.

Comets, Meteors, and Asteroids. By Seymour Simon. 1998. 32 p. Harper Collins, (978-0688158439) Gr 3-5.
This is a great kids book for a young audience and has plenty of color photos and it talks about the solar system and all its great wonders. This features wonderful basic information about comets, meteors, and asteroids that is great for introducing these concepts to kids. Most young readers are fascinated by the idea of a shooting star and this book covers that and so much more. It's a great read!

Websites
We Are All Connected.
This is a great video that talks about the universe and what its made of. This video is a blend of audio clips from icons in the science community. This is a great video to play at the beginning of a lesson plan to get kids thinking about what they are about to learn about.

Kids Astronomy.
This site is called kids astronomy and let me say it is AWESOME. The cite breaks down interactive games by planet. This is a great way for kids to interact and learn about the solar system and its planets through a fun series of games.

Kids NASA
This website is from NASA and is a great interactive and informative website for kids. They designed it specifically for kids who are learning about the solar system. They also included some pretty cool links as well. Kids will love these interactive games also included in the website.

Moon Facts
This is a great website that is all about the moons for kids. It includes plenty of fun facts and information. A good foundation for basic information.

Symphony of Science
This is a website that mixes audio from great icons from the science community mixed over music to teach different ideas and concepts. Its a fun website!


For Teachers
SOL: 6.8 The student will investigate and understand the organization of the solar system and the
relationships among the various bodies that comprise it. Key concepts include,
a) the sun, moon, Earth, other planets and their moons, meteors, asteroids, and comets.
The concepts developed in this standard include the following:
• The solar system consists of the sun, moon, Earth, other planets and their moons, meteors, asteroids, and comets. Each body has its own characteristics and features.
• The distance between planets and sizes of the planets varies greatly. The outer, ìgasî planets are very large, and the four inner planets are comparatively small and rocky.
• Gravity is a force that keeps the planets in motion around the sun. Gravity acts everywhere in the universe.
• Planets revolve around the sun, and moons revolve around planets. A planet rotates upon an axis.
• As the Earth rotates, different sides of the Earth face toward or away from the sun, thus causing day and night, respectively.
• The phases of the moon are caused by its position relative to the Earth and sun.
• The Earth is a rocky planet, extensively covered with large oceans of liquid water and having frozen ice caps in its polar regions. The Earth has a protective atmosphere consisting predominantly of nitrogen and oxygen and has a magnetic field. The atmosphere and the magnetic field help shield the Earthís surface from harmful solar radiation. Scientific evidence indicates that the Earth is about 4.5 billion years old.
Seasons are caused by the tilt of the Earth on its axis and, thus, the angle at which sunlight strikes the surface of the Earth during its annual revolution around the sun.
• Tides are the result of the gravitational pull of the moon and sun on the surface waters of the Earth.
• The ideas of Ptolemy, Aristotle, Copernicus, and Galileo contributed to the development of our understanding of the solar system.
• With the development of new technology over the last half- century, our knowledge of the solar system has increased substantially.
In order to meet this standard, it is expected that students should be able to
• describe the nine planets and their relative positions from the sun.
• design and interpret a scale model of the solar system. (A scale model may be a physical representation of an object or concept. It can also be a mathematical representation that uses factors such as ratios, proportions, and percentages.)
• explain the role of gravity in the solar system.
• compare and contrast revolution and rotation and apply these terms to the relative movements of planets and moons their moons.
• model and describe how day and night and the phases of the moon occur.
• model and describe how the Earthís axial tilt and its annual orbit around the sun cause the seasons.
• describe the unique characteristics of planet Earth. • discuss the relationship between the gravitational pull of
the moon and the cycle of tides.
• compare and contrast the ideas of Ptolemy, Aristotle, Copernicus, and Galileo related to the solar system.
create and interpret a timeline highlighting the advancements in solar system exploration over the past half century. This should include information on the first modern rockets, artificial satellites, orbital missions, missions to the moon, Mars robotic explorers, and exploration of the outer planets.
Posted by Paul Liberante at 10:54 AM