13 Planets: The Latest View of the Solar System. By David A. Aguilar. 2011. National Geographic 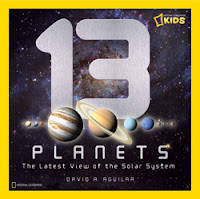 Using real pictures, this book gives students a great look into our solar system. Furthermore, this book offers great information about the planets, moons, asteroids, meteoroids, comets and the sun. With fifty amazing photographs and an easy-to-read text, this book great for introducing students to the solar system.

Although this is titled as "stickerbook", this book still provides wonderful facts about the different characteristics of our solar system. What makes this book really fun for students though, is that in the back there are numerous stickers of planets, comets, asteroids, etc. that students can use to recreate our solar system for themselves. This book offers a great way for students to manipulate the different planets in order.

This fun book gives students a tour of the solar system led by robot tour guide Dr. Quasar. The students on the tour however, are able to send postcards back home to earth to tell about their trip around the solar system. Each postcard is detailed with wonderful facts about the solar system. This book would be a great way to start off a lesson. 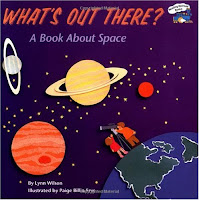 This book answers simple questions students might have about our solar system. With colorful illustrations, this book highlights different aspects of our solar system in a fun way. This book is written in very simple text. However, this book would then be a great tool to use when differentiating instruction for weaker students.

Planet Song
This page on National Geographic Kids has a great song about the planets written by a student! The song was then recorded and sung by recording artist Lisa Loeb! This fun song is a great way for students to learn the different planets.

Solar System
This page shows students real images of the planets, as well as the sun. Students are then able to click on each image to learn more about the planet or sun. This site is fun in that it gives students unique facts about each planet, rather than just the basic facts.

Space School Musical
This site provides nine different videos of a space school "hip-hopera" musical. The videos introduce students to the solar system through song and dance. The musical specifically follows a teenager named Hannah on a trip through the solar system. The great thing about this site, is that the musical is broken up into nine different videos so that students and teachers can chose which ones to watch.